We wanted to introduce everyone to a new species we are working with at AZaquaculture – the Pom Pom Crab, Lybia tesselata. Many of you are probably familiar with these odd little crabs, but they are just so unusual we had to share them with anyone who hasn’t encountered them.
Plus, they are SO photogenic! 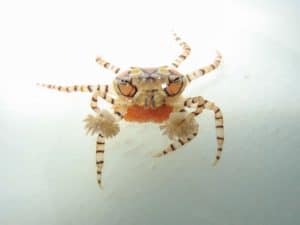 Probably their most distinctive feature, the feature from which they derive their name, is the appearance of “pom poms” held on a pair of their legs. The pom poms are actually a pair of anemones from the Genus Bunodeopsis. Pom Pom crabs use these stinging anemones as a form of defense, assuming a boxer’s posture in response to threats. Even more remarkable, as the crab molts, these anemones must be moved from the old exoskeleton and mounted to the new chelipeds! No wonder these are a favorite organism for reef aquarium owners.

As you can see clearly in the picture below, this specimen of Lybia tesselata is carrying a fine clutch of eggs along the pleopods. This picture was taken approximately 24 hours after the eggs were deposited. With such odd looking parents, we are all quite excited to start working with the larvae. Check back often, we plan to update with lots of pictures as the project progresses. 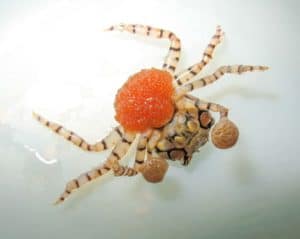 Methods of Water Sterilization for Aquaculture and Research Uses